General Colin Powell died today at age 84. The Colin Powell School for Civic & Global Leadership at City College of New York is part of his legacy.

In 2010, I was enrolled at City College of New York working on a Master’s degree in Media and Communication Arts when I received notice that I had been selected as a fellow for the Colin Powell Center for Public Policy. The fellowship came with a $15,000 stipend, enough to complete my degree and pay for my housing for my final year of school.

Prior to receiving the fellowship, I hadn’t known much about Colin Powell outside of his work with George W. Bush and I was not a fan of either man. To be honest, the fellowship’s financial stipend was the only factor to sweeten my bitterness towards his political party and associations. However, when I learned that Colin Powell was also once a student at City College of New York, I became more interested in his journey. As the first Black Secretary of State in the US, I had to admit to myself that I might be inspired by his career trajectory.

During my fellowship, my cohort studied local policies, the impact of media on communities, and practices that led to more equitable access to information. My cohort’s mentor was Farai Chideya. Under her leadership, we produced a symposium, Civic Engagement in the Era of New Media. We got to hear directly from General Powell and he shared his vision for the center, which would later become the Colin Powell School for Civic and Global Leadership. I got to see the former Secretary of State as a human being who came from humble beginnings and wanted to make a difference in the world. He found his path through duty, facing challenges head on, setting ambitious goals and taking every necessary step towards achieving them.

At the end of the fellowship, I was asked to sign an agreement that was symbolic of a promise to use my work, regardless of which field I worked in, to civically engage my community and to impact policy making. It wasn’t an oath. It wasn’t exactly something I would have been reprimanded or punished for had I not kept my commitment. But, seeing those words in writing and agreeing to them, felt more like taking a stance and anchoring a vision in the possibility that my future work had the potential to effect people. That awareness has guided me in building and shaping my own career.

Today, I work as the Chief Storyteller for Love Now Media, an empathy-centered media and news company that I founded in 2016. I want our company’s work to bring about change, to civically engage, to challenge policies that cause harm to underserved communities, and I take every necessary step to do that work well. That feels a lot like love, in practice.

As we mourn the loss of General Colin Powell, I am grateful to have a story to tell about his impact on my work. May he rest in peace. 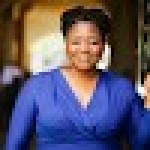 + posts
← What happens when a victim of gun violence is blamed for their own death? Small Doses, Big Difference: How a young Philadelphia Artist creatively addresses mental health and wellness →