Thank you, Serena Williams. Thanks for many years of greatness and inspiration in the sport of tennis.

Williams, 40, recently announced plans to step away from the sport soon. She and her equally outstanding sister, Venus, have dominated women’s tennis and had a strong influence on my family. We watched and cheered as these two Black girls in cornrows crashed the racial and social barriers of an elitist country-club sport.

Our daughter and son, who both played high-level collegiate tennis in Florida, were inspired by the Williams sisters when they began playing the game as children on public courts in Philadelphia.

We enrolled our daughter in a summer tennis camp at the then-Philadelphia College of Textiles and Science when she was about 7 years old. After a second year at the summer camp, my daughter, wanting to go deeper into the game, asked for private tennis lessons. This began my family’s lifelong dedication to a sport in which only a few Black people have ever excelled.

There were expensive lessons several times a week with outstanding instructors, both Black and white. Inspiring young Philadelphia coaches – such as Hyacinth Yorke, Jon Glover, Eric and Mark Riley at the University of Pennsylvania, Traci Green who’s now the women’s coach at Harvard – and Harold Solomon in Florida helped guide us along the journey.

Our daughter, Grier, went on to a successful NCAA career at St. Thomas University. She left competitive tennis due to an injury but remains dedicated to the sport. She continues to mentor and coach young players in Fort Lauderdale.

Our son, Nile, played extensively in juniors and became the co-captain of the Hurricanes at the University of Miami where he played for four years.

He continues to play, but not competitively. A resident of The Windy City, he is on the executive board of Serve & Return Chicago, the citywide tennis program for underserved youth. He helps introduce urban youngsters to the game that enhanced his opportunities. Both of our children mentor young players of all races.

Grier reflected recently on the Williams sisters’ influence. “They were a beacon for young Black tennis players, especially young Black girls,” she said. “We saw someone who looked like us.”

Last month, I hosted a guest from South Florida who was in town for a week to play in the USTA Women’s 35-85 Grass National Champions Tournament at the historic Germantown Cricket Club, only a few blocks from my home. Our son used to take lessons at the nearly all-white club, which predates the Emancipation Proclamation by nearly a decade. It was nice to revisit the club after more than 10 years. I again, however, felt like a fly in the proverbial buttermilk of the Cricket Club when I was there watching my guest compete.

Serena and Venus know this feeling very well, but never let it deter them as they came to dominate the sport and become role models for a wave of young Black players, including our daughter and son. Whether either sister ever serves and volleys competitively again, their impact on Tennis and those who play it will undoubtedly be felt and seen for generations to come.

Thank you, Williams sisters, for your excellence and inspiration. 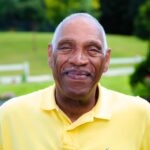 Vernon Clark is a retired journalist and educator living in the Germantown neighborhood in Philadelphia.