Solomon Love Temple stands at the corner of Cecil B. Moore Avenue and Hancock Street, proudly gazing at the newly installed mural. The subject is larger than life; its eyes fixed on something beyond in the distance. He is the subject.

Many of Philadelphia’s murals are artistic love letters to the world. They tell stories in a way that words can’t. As a singer, songwriter, producer and host of Songs For The Soul, 31-year-old Solomon understands the importance of words – how they can shape and shift reality. Deeper than words, perhaps, is the power of a visual.

Navigating the world as a nonbinary person whose pronouns include he/him/they/them and who at times is feminine-presenting, his lived experiences are filled with visceral reactions to what people see. When his friend Sarena Johnson expressed her desire to paint a mural of Solomon, it stirred mixed emotions.

“I was like, ‘Sarena, shut up. Stop playing with me,’” Solomon shares. “She told me that it was based on a conversation we had about being visible and me not feeling safe leaving my house sometimes looking the way that I do.”

Throughout their six-year friendship, 25-year-old Sarena, a visual artist, has been a big part of Solomon’s ability to live more freely and authentically – on a quest to be unbound by fear of people’s reactions.

“After hearing what Solomon’s going through being himself, and my relationship with Solomon, who helped me be myself – like taught me how to get the lipstick off, really gave me my womanhood in so many ways,” Sarena explains, “to think that he couldn’t walk out of his house and be the fabulous self that I know, just made me mad.”

Sarena stands in front of the mural – her first ever – and studies Solomon’s face on the wall.

“I want people to have to deal with Solomon’s image and I want people to honor it. And on days when Solomon doesn’t feel like leaving the house with all his fabulousness, he will have an image of himself that is fabulous even on those days,” she adds. “It’s just to honor him. And to know that I have the ability to do that. Why wouldn’t I?”

It was that kind of passion, trust, and agape love that made the decision to do a mural easier for him. Not to mention it was a full-circle moment.

The process was organic and intentional from the beginning. When Sarena considered hiring a photographer to take the photo that would become a mural, Solomon gently pushed back and suggested that she, whose artist eye he trusted, do it instead. Sarena took the photo, and got to work. She began to walk the nearby streets of South Philly – somewhere where Solomon would see it – in search of a wall, simply offering a free mural.

Feeling that a mural could catch the attention of potential customers, a business owner agreed to allow the painting on the side of his property. With a wall secured, Sarena acquired sponsored supplies from Sherwin-Williams. The experience of painting the mural would turn out to be just as inclusive and transformative as the mural itself.

“I’m used to working alone in solitude and no one’s like, ‘Good job!’ but the people were so happy,” she says energetically. “Kids came to help paint it, which was awesome.”

Sarena started on a Monday and finished by Friday. As the mural’s subject became clearer with each stroke of the brush, disapproval grew and eventually spilled onto the sidewalk by Saturday morning.

“The [owner] came to me and said, ‘you got to paint over it.’ At first, they were like, ‘the face just needs to go,’” Sarena recalls.

She asked for a reason. The owner’s response was pointed, “We just hate it.”

Sarena informed Solomon about the situation.

“I was scared to tell Solomon because I was like, this is exactly what this is about: the erasure of your image. And it just felt very symbolic,” she shares.

His response was direct as well: “I don’t want to be there unless I’m honored.”

Accustomed to this kind of reaction and aware of this possible outcome, Solomon shifted his energies into a proactive mode.

“I was like, we’re going to have to speak out about it because people were literally talking to Sarena about how excited they were about this mural – that there was going to be more diversity in the community and that it was visibility for trans people and non-binary people,” Solomon explained.

Just before getting together to record a video about their search for a new mural space the owner stopped by to offer Sarena further insight about why they wanted the mural removed: the owner’s brother was killed by a Black man in North Philly.

“My mother, every time she sees this mural, she has PTSD…so that’s why we really want it covered,” they shared.

In that moment reality settled in on a deeper level.

“I never really talk about any hatred toward me or things that people say when I’m walking down the street or just people hating on me, but I was like, ‘this is something that’s way bigger than both of us,’” Solomon said.

Sarena followed his lead, proceeding with the video and respecting Solomon’s wish of not disclosing the location.

“I didn’t want that business to be targeted. Period. Even though that was a racist act,” Solomon clarified.

He recalls seeing the owner while standing in front of the mural one day.

“I wasn’t dressed up. I was just looking like a guy,” he remembers.

Leaning into the power of a visual, Solomon made a decision. “I was like, I’m going to dress up and go in there because I want to talk to him so that he can actually see a non-binary person and talk to me directly and say what he has to say or whatever.”

The owner again relayed the story of his mother’s trauma from his brother’s murder.

Solomon described the conversation, “He was like, ‘Yeah. You get that, right?’ I was like, ‘No, I don’t. I don’t get it. You know that people are [online] thinking this is racism, racial profiling, and transphobia?’”

Solomon recalled the owner’s response, “No, it’s not that. I don’t care about how you look or what you wear. What am I supposed to do? My mother is literally crying when she looks at the mural.”

Solomon suggested the owner’s mom may need healing and said, “I just want you to know even though that’s a reaction and something she probably can’t control…it’s racial profiling.”

After the conversation, Solomon instructed Sarena to cover the mural, and the search for a new location commenced. Theory Studios offered their wall on the corner of Cecil B. Moore & North Hancock Street in Kensington, and Sarena got to work, again. The mural went up, this time nestled within the work of other visual artists, and yet standing out among them.

“I almost can’t believe that it’s here,” Solomon said with a shake of the head.

“I can’t believe that when I’m driving down Hancock, I can see it from a block away. I love it because I feel like it’s even more visible in this community than it was in South Philly.”

Ultimately, Solomon’s image on North Hancock street supports the visibility and agency of so many people.

Sarena’s initial goal, despite the challenges, was achieved not just for her dear friend but for an entire community of people with similar experiences: to feel seen and honored. 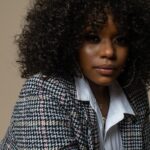 Syreeta Martin is an award-winning journalist and the Strategic Storyteller for Love Now Media.