A Mover on a Mission to Heal

Twerking brings shame for some. Others use it to advocate for justice and wellness.

“This is a sacred space. There is no room for fear, lack, doubt, or judgment,” declared Leaira Soulight in full voice as her Twerk Tabata™ class started at the Living Arts Dance Studio in the Northern Liberties section of Philadelphia. Women of all ages and body types responded with an eruption of cheers while adjusting their dance attire, pulling up knee pads, tightening their ponytails and finding just enough space to move on the packed dance floor. For about half the students, it was their first time seeing the popular Instagram ‘twerk master’ and content creator in real life. By affirming the space as sacred, she set the tone and intentions for the class. She wants to make sure the women know her class is a safe space for each person to explore their body and push beyond their physical and psychological limitations.

Leaira, who is the owner of Soulaira Studios based in Mabelton, GA (just outside of Atlanta) leads a monthly twerk class in Philly as part of her “twerkshop tour” which also stops in Dallas, Houston, Vegas, New York, Baltimore, New Orleans, and several other cities. On the tour, she introduces women to dance techniques through a high-intensity interval training (HIIT) style workout that cultivates the skill of moving the gluteus maximus in various directions – up, down, rapidly, rhythmically, and sensually. That’s the part people expect. In Leaira’s classes, however, participants are also introduced to wellness practices such as healthy eating, meditation, deep breathing, and general self care.

Teaching wellness, first as a yoga instructor in 2013, Leaira explored meditation, herbs, a vegan diet and other holistic health practices as part of her personal journey towards enlightenment. Through the tour, she not only continues to teach others, but moves in her own expression of power and purpose to facilitate healing. This juxtaposes what many know or understand about the twerk style of dance.

In popular culture, twerking is often associated with mainstream rap music and the exotic dance scene. Male rappers have prominently celebrated bare-bodied women in music videos since the 1990’s with songs like “Rump Shaker” by Wreckx-n-Effect. More recently, women rappers like Megan Thee Stallion, Cardi B, and City Girls have reclaimed and featured twerk as a recurring style of dance movement in their videos. Artists like Big Freedia have helped to popularize New Orleans rooted “bounce” music and dance which has a similar dance aesthetic. The dance style’s high visibility in nightlife and underground culture has led to its association with debauchery, sex work, and the sex economy.

For many women, especially Black women, twerking as a style of dance creates a cultural dissonance rooted in identity politics. Many are aligned with perspectives against twerking such as those shared by Queen Afua, a spiritual and wellness leader who offers a ‘womb wellness workshop’ teaching methods for healing from trauma and other womb issues. Her digital talk series, “Sacred Woman” featured commentary by priestess Olori Oyadele Ogunsina who says “The time for twerking is over. There is too much work that needs to be done as women. We need to set an example as women that we are not sexual objects here on earth for the pleasure of whomever.” Those who share this belief note Black women are underrepresented in the media and are often projected through negative stereotypes therefore, images of half-naked bodies and bouncing derrieres represent Black women as overly sexual, low class, and unintelligent.

For women who take Leaira’s Twerk Tabata class, their reasons range from joy-seeking to connecting with parts of themselves that feel muted. Afia Ohene-Frempong, MSW, MEd is a Sex Educator and Mental Health Specialist who has taken the class in Philly twice. “Twerking lets me commune with percussion in the most satisfying way. Like everything else, you have to ask yourself, ‘What’s my motivation? Is it to feel free? To attract attention? To be included? To get paid? People may reflect their own discomfort by sexualizing your behavior but only you know why you’re twerking,” she said.

Shesheena Bray, a mental health therapist who also works as the program director for the ‘me too.’ movement, took the Philly Twerk Tabata class twice. “Honestly, I love it. It feels great to be unapologetic in my femininity and to get a good workout…I feel powerful and I leave feeling empowered.” For Kim Russell, taking the class was a gift to herself to celebrate her birthday. She feels a cultural and spiritual connection to the style of dance. The poet, storyteller, and Love Now Media contributor said, “this form of dance has evolved over the generations but it’s rooted in our history. It helps us to tap in and align our root chakra.”

Leaira believes that people who criticize twerking are out of touch with their bodies and the African cultural history of movement as a way to celebrate life, rites of passage, and womanhood. For women who feel out of touch with their bodies because of religious restrictions, body-shame, trauma, and other reasons, twerking in a space with other women can help release blocked energy, allowing them space to reconnect with themselves and access healing.

“So many women come to me and share personal testimonies. They’re like, ‘I just went through something deep’ and it’s sometimes dark, traumatic stuff. And they’re like, ‘I feel so much better and this is part of my healing.’ It’s just really transformative.”

This story is part of Love Now Media’s exploration of the Politics of Play. Our reporting takes a solutions approach to covering social issues and inclusive models for play while demonstrating the positive impact play, leisure, and the arts have on mental health.

Love Now Media is one of more than 20 news organizations collaboratively reporting on solutions to poverty and Philadelphia’s push towards economic mobility. 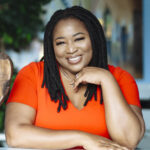